The Place of the Museum in the City

What is the place of a museum in a city? Of this museum in our city? What role do we play? What is our purpose? What are we here for?

Why don’t we start talking about it?

This blog will be one place where we can kick off what I hope will be an ongoing conversation.

What do you think of this picture? We don’t know for sure the reason for this crowd, or the precise date it took place, but they did gather here. We know it is some years on from the construction of the building in 1911-1912, as the trees and foliage have matured, and ivy sheathes the balcony and staircases. This building then served as Chilliwack’s City Hall, positioned symbolically at the geographic heart of the community, just west of Five Corners. It was the site of many significant speeches, the War Memorial, animated conversations about ideas that matter, as well as fun civic happenings. When Chilliwack wanted to think through something together – this is where we came. Could this place become that again? 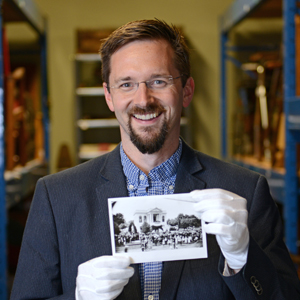 Before returning home to Chilliwack in February 2015 to take on the role of Executive Director here at the Museum, I worked for ten years in communities across Alberta – both large and small. My task was to help local people and municipalities to understand, protect and conserve their locally significant historic places – mainly heritage buildings. In that job, I learned from so many committed and passionate individuals and groups that historic resources are as much about the present and the future as they are about the past. It’s similar – but unique – with our museum and archives work here. If we are going to create a meaningful and vibrant future for Chilliwack, then we need to explore our roots – our multifaceted history – in deeper ways. Stepping into the Museum or Archives, especially if you’ve never come before, is a great way to do that. Unique opportunities like TEDxChilliwack, which the Museum is hosting in February 2016, will help us to see these “stories that empower us.” In this way, we take up that place again as a context for those important conversations.

In 2012, Larry Beasley, the former Chief Urban Planner for the City of Vancouver, gave a game-changing speech that inspired us in the museums world to think a new thought. What if we began to consider “The City as Museum and the Museum as City?” Beasley asks us to consider “what the city museum can do as a part of the ongoing creative process of a city that is forever changing and being re-created.” That is every city, and that is Chilliwack.

In 1979, the Township of Chilliwhack and the City of Chilliwack amalgamated to form the District of Chilliwack, and the old City Hall became vacant. Through the diligence, tenacity, and foresight of the Chilliwack Museum & Historical Society and the support of the Province of BC’s Heritage Conservation Branch, a feasibility study was commissioned. The engineers that wrote that study stated that the old City Hall building would be “logical, feasible and practical” as a museum. A major rehabilitation project ensued, and on March 21, 1987 the historic City Hall reopened its doors as the Chilliwack Museum. We’ve been here now for almost thirty years – still at the physical heart of the city.

Since the late 80s, the world has changed dramatically, and so have museums, as Prof. Jack Lohman, Director of the Royal BC Museum, explores in his recent book, “Museums at the Crossroads.” Just think of life before the internet and smartphones. We’re no longer simply “cabinets of curiosities,” belonging to the elite of society – with treasures plundered from ancient and long-dead civilizations. Rather, museums now often conserve and exhibit the material “stuff” of cultures that are very much alive, and vibrant. Today’s museums are like schools, universities, and labs, places of learning – environments for discovery. We have the great asset, as an organization, of being local. Chilliwack is our theme. If you ask “what is the focus of your collections?” (as many do), the best answer is simply: “Chilliwack.” And that means we are – in a way – about you, and the people, places, things, and moments that matter to us all.

It’s my hope that we can explore some of these ideas together, here at the Museum, and in other settings too. What does it mean to inhabit this place – to be and live well in Chilliwack? What has it meant to people over the centuries, and what does it mean to us now? What will it mean for our children and grandchildren? Let’s begin and continue to ask those questions – in exhibits, in public programs, in learning ‘laboratories’ and informal gatherings. Help us to chart our future, as a museum, and as a city. What does it mean, in the words of T’xwelatse (Herb Joe), that “we have to learn to live together in a good way“?  We believe that museums and archives can be places in which we discover how to do just that.

What do you think? Please share your ideas. We look forward to hearing from you.