While completely losing myself in sports-related research for our upcoming Game On! The Evolution of Sports exhibit, I have come across a few gems. One such gem was the discovery of a traveling baseball team called the “House of David”.

The Israelite House of David was established as a religious community in Benton Harbor, Michigan, in 1903 by Benjamin Purnell, along with his wife Mary. The purpose of this colony was to gather the 12 lost tribes of Israel for the “Ingathering”, to await the Millennium. Benjamin Purnell, a sports enthusiastast, encouraged the playing of sports. The House of David started playing baseball around 1913 as a weekend endeavor and by 1915 the team was playing a more grueling schedule. By 1920, the team was “barnstorming” around the country, earning money for the colony, and using the team as a way to preach to potential members. While the team was on the road, the colony established a home team, a girl’s team, and a junior boys team. The players were led by its manager, Francis Thorpe and the team was originally comprised of members of the colony. The team was always an attraction by their long hair and beards, a doctrine of the religion, and would draw substantial crowds wherever they played. By the early 20’s, in need of participate with better playing abilities and by the lack of colony member participation, were in the business of hiring players not of the faith. These “Players for Hire” were required to grow a beard, and some played for the team for many years.

After a lengthy legal battle and subsequent death of Purnell, an internal power struggle for the colony ensued. After this struggle, the colony divided into two separate factions, and eventually two separate colonies. One was the Israelite House of David, whose members believed that Benjamin was the one and only leader, which was led by colony pillar Judge H. T. Dewhirst. This colony went by the moniker of “The House of David”.

Both factions of the House of David teams visited small communities all over Canada and the United States. Different House of David teams visited Chilliwack many times throughout the 1930s, playing local teams at Chilliwack’s Athletic Park. The August 1, 1935 article of the Chilliwack Progress remarked “Chilliwack fans got a big bang out of the famous ‘pepper’ tricks,” which were said to be along the lines of the fancy basketball moves of today’s Harlem Globetrotters. Many of the Chilliwack games raised funds for the Chilliwack Amateur Athletic Association but also provided lots of entertainment for hundreds of spectators. At fifty cents, it was quite a good bargain (valued at under $9 if adjusted for inflation).

Don’t miss our upcoming exhibit Game On! The Evolution of Sports in Chilliwack, which opens October 29! 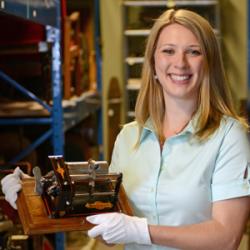