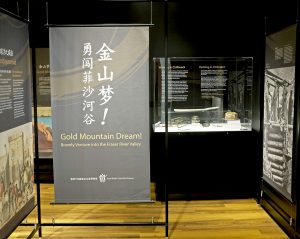 Installation view of the exhibition.

In the 1800s, gold fever consumed the world. Masses of people from all corners of the world voluntarily migrated to far-off locations such as Australia, New Zealand, California and British Columbia. Their goal was to find not only gold, but a better life for themselves and their families. By 1858 the territory now known as BC saw its first major gold rush along the Fraser Valley.

In Chinese culture, there was a myth about 山金 (Gold Mountain) that helped fuel an influx of migrants who journeyed from ports in Hong Kong across the Pacific Ocean to Victoria in search for new fortune. This resulted in the first large Chinese settlement in Canada.

After the gold rush lost its momentum, many workers of Chinese origin chose Chilliwack as a place to settle down and try to build a new life. It wasn’t easy. Much of Chilliwack’s early infrastructure, from roads to farmlands, was developed by Chinese laborers. It was strenuous work, clearing the land of trees and cultivating soil at low pay, and many workers couldn’t afford to have their families join them in Canada. 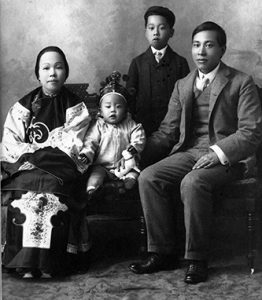 Many persevered, however, and by the 1880’s a Chinese merchant class emerged (and between 1908 and 1930 comprised 10% of the registered businesses in Chilliwack). By 1920 the city had two distinct Chinatowns: Chinatown North situated above the Five Corners region; and Chinatown South, around what is now Yale Road West. At their height, the Chinatown’s were host to a bustling population living in large 2-storey wood-frame buildings, including a Chinese Masonic Hall.

Key historical content for the exhibition’s local elements was based on the 2011 book Chilliwack’s Chinatowns: A History by Chad Reimer. The Gold Mountain Dream panels are a travelling exhibition organized by the Royal British Columbia Museum, Victoria, in collaboration with the Canadian Museum of History in Gatineau, Quebec. These panels are bilingual, and are written both in English and Simplified Chinese. Beyond Chilliwack, Gold Mountain Dream has been displayed at the Guangdong Museum of Chinese Nationals Residing Abroad (Guangzhou, China) and the Chinese Cultural Centre Museum (Vancouver, BC). 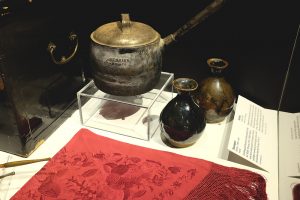 Detail view of artifacts in a display case.

The exhibition has interactive content for viewers of all ages, from touchable objects, to videos, an audiostation, and an introductory Mahjong set. So bring the whole family for a visit, or plan a Thursday evening date night to catch this stunning exhibition!

The exhibition will continue running throughout the summer until October 9th.