And now for something completely different!

One of the things I most love about running summer family drop-ins is the flexibility they offer visiting families. It’s interesting watching a simple concept we decide to focus on for a week become something completely different when the variety of voices that join in change and adapt it. 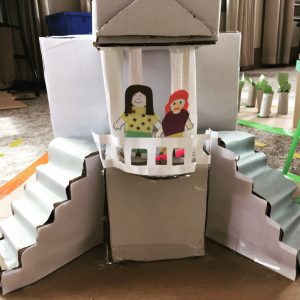 For the past two weeks we took over our upstairs programming room (we call it the Chambers Gallery as it’s the room where city council used to sit when this building was city hall) and transformed it into a cardboard City of Chilliwack. It was a simple idea, we’d map out an area around five corners, including some of the historic buildings in (roughly) the correct space. The rest we’d leave open, setting up tables of craft supplies for inspiration and creation stations for our visiting city builders.

Sometimes all you need to do is provide a small spark for inspiration and the creativity follows. We didn’t try to create an accurate representation of five corners from any one era, but let our city builders (visiting families and children) decide what the city needed. Some of the buildings were recognizable, staples of downtown like The Bookman, complete with Nietzsche watching in the window, Sticky’s candy and even a “Boozeny’s” (Bozzini’s). But other additions were wishful like the two cupcake factories that popped up and the house that opened up to the front door of Sticky’s. By the end of the two weeks of cardboard city we had connected (pipecleaner) power, streets filled with interesting businesses and people scattered throughout.

Is this all silliness?

Well yes, but maybe not all silliness. This is an informal learning environment – we had an idea of what might be learned from co-creating a cardboard city with our visitors, but there was lots of room for new discoveries. Not only did our visitors pick up on the few historic buildings we put in place beforehand and wonder about their history, but they were inspired to add something that they wanted to see in the city too. Ok, so maybe two cupcake factories is a little unrealistic, but what if we were inspired by our (real) city in the same way our visitors were by the cardboard city? 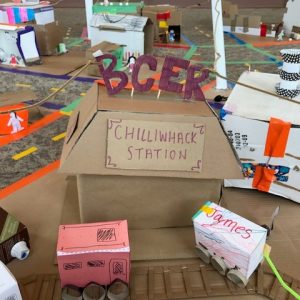 As our cardboard city grew and changed over the two weeks it was interesting to hear some of the conversations it sparked and listen to the enthusiasm of visitors. I’ll leave you with the words of one of our more reluctant city builders when he first saw the city, “Ok, this is pretty cool.”

While cardboard city may be over, we’re still offering a great line-up of activities throughout the summer. Check out our Summer Family Drop-in schedule! 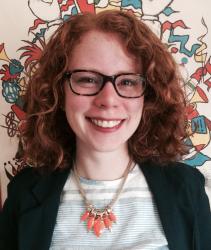 When I was younger, I wanted to be an archaeologist. I loved doing puzzles and I wanted to find artefacts and piece them into the story of our past. I still love archaeology, but I’ve ended up taking a slightly different path. After graduating from York University with my degree in anthropology, I was pretty sure I wanted to work in museum education. With years of experience working and volunteering with all age groups in various educational capacities, I thought it would be a great combination of my passions. After a year in France teaching English, I attended the University of Toronto and received my Bachelor of Education. Since then, I’ve been lucky to work on some exciting education and outreach projects in Toronto with museums, art galleries and cultural institutions. I’m excited to be at the Chilliwack Museum and Archives and have brought along some big ideas for the future of education and engagement programming here at the museum. I’m looking forward to meeting you, hearing your stories of Chilliwack and sharing my passion for history with any and all ages!