Connecting with the Collection: Cats in 3-D

The stereoscopic card was a popular form of household entertainment in the late 19th century. Developed soon after the advent of photography, stereoscopic cards provided the illusion of 3-D imagery. These cards were easily reproducible and fairly inexpensive for individual households to purchase, and consequently enjoyed a worldwide market.

I recently reviewed the Museum’s collection of stereoscopic cards, and while many of the cards portrayed famous events, landmarks and persons—several cards did not. Rather than recording the momentous, these humble scenes portrayed situational jokes and household tableaux.

Most striking among these cards was the humorous scene titled, Tabby as Grandma. This card pictures a well-pleased tabby cat lounging in a comfy armchair, knitting needles at the ready, and neatly dressed as “Grandma.” 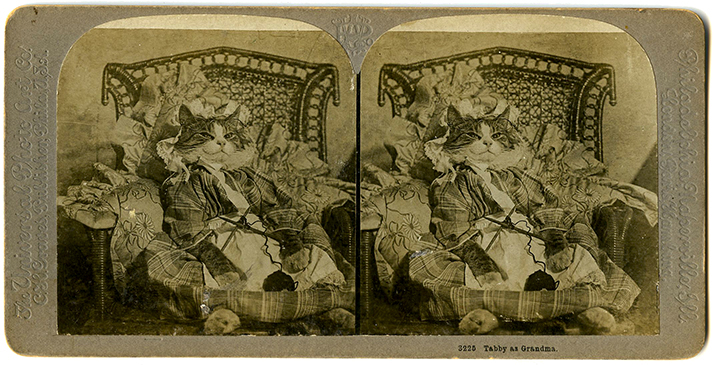 The beauty of studying history is how it can inform the present, often in unexpected ways. Let’s take a paws (ahem) and consider Tabby as Grandma from our vantage point—namely, that of internet users in 2017. Today, the undisputed champion of social media shares and viral youtube videos is none other than the felis catus (domestic cat). Both lauded and vilified for possessing low-brow accessibility and tremendous popularity, many the critic have questioned humans rising obsession with felines. 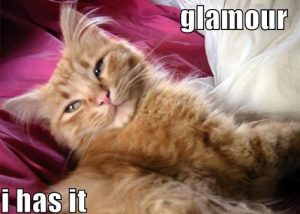 But what if this obsession didn’t just begin in the age of the internet? Looking at Tabby as Grandma, we can infer that cute and/or humourous cat photographs were being produced and distributed en masse as soon as humankind had the technology to do so inexpensively (for instance, with stereoscopic cards).

It does seem to prove that before the internet brought us lolcats, Grumpy Cat, and many the meme, the human love for their furry companions was already a well-established trend. And in fact, have captured our hearts for (at the least) over a century!

—
The Tabby as Grandma image was originally published by The Universal Photo Art Co., in Philadelphia, USA.