Eddy-Out and Ferry through Some Local History

Sometimes it is the historical tangents that prove to be the best stories.  While looking up landings and ferries near Chilliwack I came across this brief news clipping from 1936: 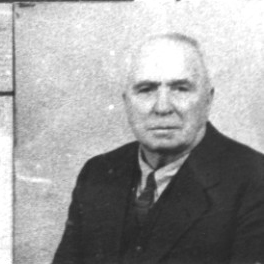 The clipping is short and to the point because everyone in town already knew about the Rosedale-Agassiz ferry and the ferry’s captain.  However, being a relatively new arrival to Chilliwack (by 1936 standards) I had not heard of Captain Henley before.  Therefore I dove deeper into the archival records.  Treading through the stacks I learned that there is so much more to this story than just a minor repair to a ferry.

John Thomas Henley was born on October 11, 1872 near Owen Sound, Ontario.  In 1894, Henley began migrating west spending time harvesting in Manitoba and logging in Wisconsin and Minnesota.  Four years later he arrived in Vancouver.  He quickly departed Vancouver for Dawson, Yukon where he “found gold… and spent it too” (Chilliwack Progress, 14 February 1961).  Nine years later Henley left the Yukon for Chilliwack arriving in June, 1908.  A world traveler, Henley said later in life, “I’ve seen most of the major productive spots in the world, but none of them can top the Chilliwack Valley in horticulture and agriculture” (Chilliwack Progress, 7 December 1949).

In Chilliwack Henley worked for nine years as a butcher and served as an Aldermen for the City of Chilliwack from 1928-1933 and again from 1942-1948.  However, he is best known as the ferry captain on the Rosedale-Agassiz ferry. 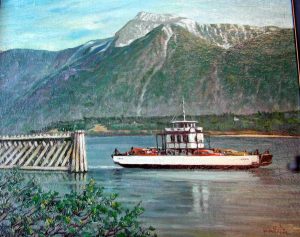 Despite the setbacks Henley continued to operate a ferry between Chilliwack and Harrison Mills for nine years.  Henley later said, “I’ve had a lot of misfortunes, but I’ve always had good health to carry me along.  And I’ve had a lot of fun, too” (Chilliwack Progress, 7 December 1949).

In 1932, after serving as an engineer on the Rosedale-Agassiz ferry Henley “took a charter contract to operate the ferry boat for the provincial government, under the public works department…” and became “master and manager of the ferry at the Rosedale-Agassiz landings” (Chilliwack Museum and Archives, AM 22, File 122).  Henley served as the Captain of the Eena until 1951 managing the Rosedale-Agassiz ferry.  Please note that sources differ on Henley’s exact captainship.  Some sources say he was a captain in 1929 of the Eena while other say he was only a crew member and not captain until 1932.

Ever restless, in 1938 Henley briefly left Chilliwack for a world tour.  His tour included Singapore, Mount Everest, the Taj Mahal, Egypt, Palestine, France, England, and Scotland.  He even “had a turn or two around Gai Paree” (Chilliwack Progress, 7 December 1949).  Never short of witty comments, on his return to Chilliwack Henley told reporters:

“Of the four most wonderful man-made things I saw on the trip, I had to come home to Canada to see the one that topped them all… There was the Taj Mahal in India, the bust of the Virgin Mary in Jerusalem and the crown jewels in the Tower of London.  But the most wondrous thing of all was the sight of the Dionne Quintuplets in Canada… I saw Niagara Falls too, for the first time and then I came back to Chilliwack and witnessed another amazing thing… a man with a wooden leg dancing the two-step” (Chilliwack Museum and Archives, AM 335).

Captain John T. Henley died at Chilliwack general hospital on February 13, 1961.  At the very least he was an interesting re-settler of the Chilliwack valley and seemed like the kind of individual worth grabbing a drink with.