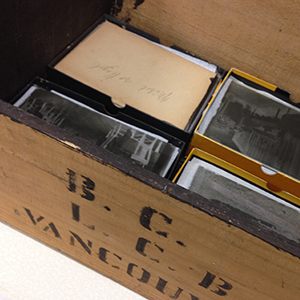 View of the Dragonfly Gallery collection of glass plate negatives and prints, in the container they arrived in. [Shannon Bettles photograph]

Sometime in 2015 Alain Nowak of Ladner answered a Craigslist advertisement about a stuffed alligator, as antique dealers do.

Nowak’s Dragonfly Gallery is a local fixture on Ladner’s historic waterfront. Stuffed alligators are at home amongst church pews, commercial shoe stretchers, vintage tailgates, tin signs and tricycles. As it turns out, the reptilian carcass was being flogged at too high a price for Nowak. Determined not to leave empty-handed, he purchased a box filled with unbroken 5” x 7” glass plate negatives and hundreds of photographic prints from the seller who reportedly discovered them in a Coquitlam dumpster some 30 years.

Last October I received a phone call from the Matsqui-Abbotsford-Sumas (MSA) Museum, when one of their Trustees stumbled across the collection at Dragonfly Gallery. After identifying the collection’s content as Chilliwack-centric, I received the 108 glass plates and prints for the Chilliwack Museum and Archives. 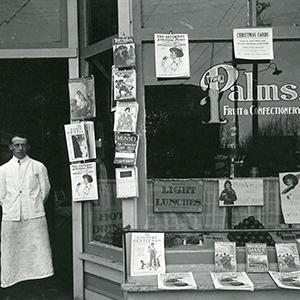 Though we were able to identify most of the locations pictured, questions remained. For instance: Who took these photographs? When where they taken?

Working with and researching archival collections can be compared to a detective examining pieces of evidence as a way to discover clues to solve mysteries. With the Dragonfly collection, one of the photographs held what I like to call, the “key” – it is full of clues which unlocks the mystery. Let’s take a look:

The photograph shows a man standing in the doorway of a store called: The Palm’s Fruit and Confectionary. The Chilliwack Museum and Archives had already undertaken previous research on this business, having artifacts including a menu, in the artifact collection. 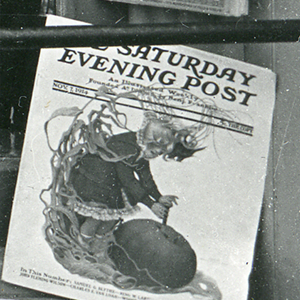 As well, a quick keyword search of the Chilliwack Progress newspaper, provided more information, such as the opening date of the business in 1914.

Knowing that Mr. Fred G. Leary was the owner of the business opened up more avenues of research. A search of the Archives’ catalogue reveals that we have some photographs of Fred Leary. Could the man in the Dragonfly photograph be the proprietor of the business Mr. Leary?

We believe this is the case. Therefore, the photograph can be dated to as early as 1914, when F. G. Leary opened his business. But it’s not the identification of Mr. Leary that is the clue unlocking the mystery of the entire collection – it is the postcards and magazines visible in the store window!

If you look closely in the shop window, you will see a number of magazines. By scanning the glass plate, we were able to zoom in close enough to read the date printed on the magazine – November, 1914! This dates the photograph more precisely. 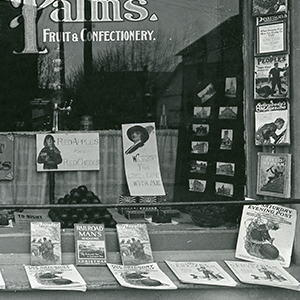 Remember those postcards in the shop window? Look familiar? These postcards contain images of buildings around Chilliwack. In fact, these images are exactly the same images as the glass plate negatives in the Dragonfly Gallery collection, which are now sitting on my desk. It turns out that F.G. Leary developed photographs at the Palm’s, and it’s very likely that he, himself, is the photographer behind the photographs in question and producer of the glass plate negatives. This revelation suggests that the entire collection of glass plate negatives can also be dated to 1914 and can be attributed to Leary as photographer. Further, this means that similar postcards in our collection were likely purchased originally from The Palm’s confectionary. 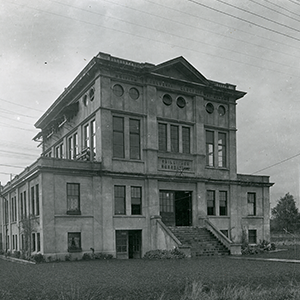 Chilliwack in 1914 at the age of 25 years and opened an ice cream parlor: Palm’s Confectionary. In 1926 Fred Leary was elected as a trustee of the local school board. He

served in this capacity for 49 years, retiring as the longest serving elected official in 1975. 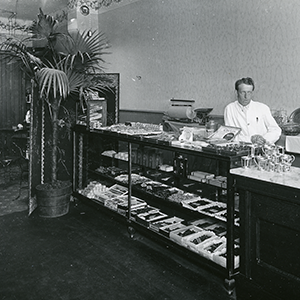 Frederick Gordon died in Chilliwack on October 6th, 1985 at the age of 96. He is buried at the Odd Fellow’s Cemetery, Little Mountain. A Chilliwack school, F.G. Leary Fine Arts School, is named in his honour.

While much of this mystery has been solved, there is still a pressing question: How did the glass plates end up in a dumpster? To this we have no answer. At the Chilliwack Archives we do our best to answer questions and gather information about our collections. However, we rely on you – the community – to fill in the gaps with this and the many other collections we preserve. 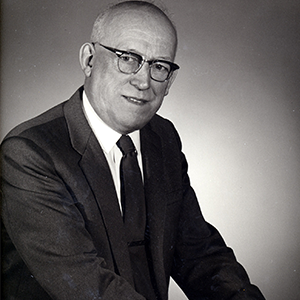 Formal studio portrait of Frederick Gordon Leary, Chilliwack Board of Trade Citizen to be recognized for 1956. Norman Williams portrait. [P5365]

I encourage and welcome you to come into the Archives to view the Dragonfly Gallery collection highlighted in this blog. We will soon be adding these images to our online catalogue for easier access once they are digitized and prepared for long-term preservation. 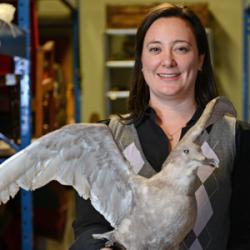 I chose to hold this seagull in my profile picture because when I was growing up a love of animals fueled my dream of becoming a veterinarian. However, allergies prevailed, and so I followed the path my second love led me towards - art! I graduated from the University of Guelph with a BA in art history in 2001 (though I like to tell people that I majored in ice hockey). I played on the women's ice hockey varsity team with the Gryphons for four years. My interests in art soon led me to volunteer at my local museum. I loved it. In 2003 I pursued my postgraduate diploma in Museum and Gallery Studies from the University of St. Andrews, where I learned so much about what happens behind the scenes to preserve and present history in museums. In my work as Archivist here at the Chilliwack Museum and Archives, every day and every research question is unique. Helping visitors access historic materials, working closely with wonderful volunteers, and handling pieces of Chilliwack's history inspires me. Currently, I'm working on my MLIS from the University of Alberta and I enjoy making websites, playing sports, and traveling with my family.