Connecting with the Collection: The Hats of Violet Dickinson 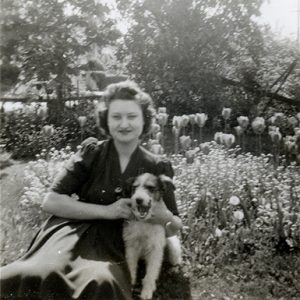 When it comes to fashion, the Chilliwack Museum textile collection has some articles of note, from a pair of 1900’s buffalo fur chaps (1988.030.001a-b) to a 1920’s beaded flapper dress (1995.006.007). Garments such as these provide an example of the changing trends in personal adornment over time, and tell a particular story about the history of Chilliwack.

One such collection that I’ve had the chance to review lately are the fabulous hats of Violet Dickinson. As Mrs. Dickinson was a fixture within the community for over 80 years, her hat collection represents the changing trends in modern headwear, particularly in the era from 1940-1970. Below is a sampling of the styles now held in the Museum collection. 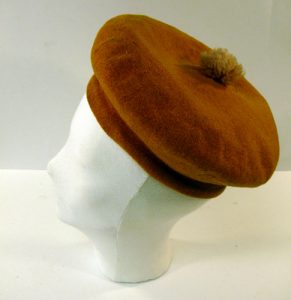 The beret and its Scottish variant, the tam-o’-shanter, have a long history and various associations tied to local and military identity, going back to the bronze age. Other associations, as a revolutionary symbol (think Che Guevara) or the Rastafari movement, also follow the beret. As a modern accessory, such caps were worn by cultural icons from Picasso to Thelonious Monk, and the stereotype of the beret-adorned artist exists to this day.  In North America, the look has been a popular fashion accouterment since the 1920’s. In 1933 Chilliwack, you could buy a “beret tam” from David Spencer for .79c. 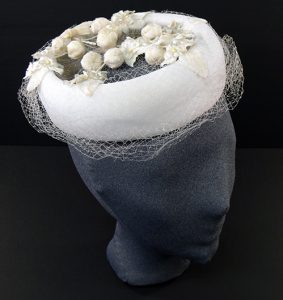 The pillbox style is characterized by a flat crown, straight upright sides, and by having no brim. Historically, this shape of hat was used as military headgear, however the modern women’s version was invented in the 1930’s, and was perhaps most famously sported by Jackie Kennedy in the 1960’s. This variant on the pillbox style (CMA 2017.044.003) is topped with stiff netting and a flower motif.

The third hat (2014.077.016) is shaped in the cloche style, which is characterized by a bell-shaped, close-fitted look. Popularized between 1922 and 1933 (think Josephine Baker), the style enjoyed a resurgence in the 1960’s. This particular hat is made with in a decorative, “lacy straw” style. The gauze bow adds to the delicate appearance of the piece. 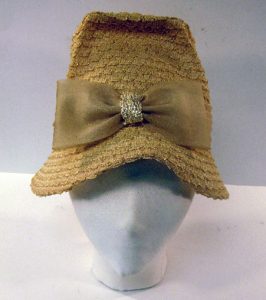 Violet Phyllis Dickinson (nee Craven) (b. April 1, 1919, England–d. September 28, 2013) came to Canada with her parents and siblings in 1928. The family lived in Agassiz for a year, then moved to Chilliwack. In 1942 she married S. Perry Dickinson, and they had two daughters. Her hobbies included knitting, making artificial flowers, and collecting and caring for a small aviary, and a large assortment of rare tropical fish. Dickinson is well-known for her role in hosting the “Chat-A Way” Club—an initiative of the Chilliwack branch of Soroptimist International—from her home twice a week during the 1950’s. The club went on to become the Chilliwack Senior Recreation Centre. She continued volunteering in the community throughout her life.