The Chilliwack Progress: Heart of Our Community

Have you seen the For Sale sign at the Progress’ Spadina Avenue office of late? 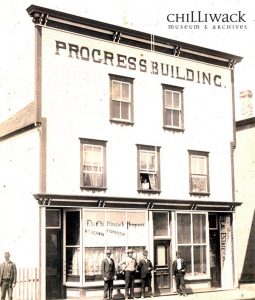 The first Chilliwack Progress building from the 1890’s with WT Jackman as Proprietor. [PP500552]

Will it be redeveloped or remain as commercial property? How will it impact the downtown core and commercial presence in the neighbourhood? Similar to other notable buildings going on the market around town, it made me recount the impact of these structures and subsequently what the change on the landscape will mean.  I immediately began researching the impact of our community newspaper and the history of the building itself.

Until post-war suburbia raced in and changed our downtown, the ‘heart’ of our community, it was thriving and bustling.  Not that this blog post is about our downtown specifically, but it is about identity and place.  Having a place to identify as the ‘heart’ of a community could have been easier for Chilliwack residents before the strong influence of the vehicle and subsequent development of the shopping mall.  Five Corners (previously known as “Centreville”) was a nucleus of commercial and social interaction and a short walk from many residential homes.  The Chilliwack Progress office has (whether it sought out to or not) shaped identity and place, in and for our community since the late 1800’s.

Situated amongst some of the most frequented buildings in the downtown, The Chilliwack Progress was a thriving hub of information, activity and culture.  It shared real estate with the likes of the Commercial Hotel, a shoe store, On Lee laundry, the post office, a bakery, hardware store and drug store. Investigating a bit further into this building I found that the Progress remained at this address for 83 years!  Over time the building had a few face lifts, notably in the 30’s with a very stylish post- modern look.

What I find fascinating is that the Chilliwack Progress was the ‘heart and soul’ of our community.  For those that had lost something, wanted to gain a roommate or sell something, where did they go? The Progress! If you had donations of food or money that you wanted to give to a local charity, where could you drop such items off at? The Progress! Colouring a poster contest and want to drop off your submission, where should you go? The Progress!

1955- Please return these keepsake pearls to the Progress office.

A 1918 rental advertisement for a farm. Where should one apply? The Chilliwack Progress office.

An advertisement in the Chilliwack Progress, 26 June 1974 [https://theprogress.newspapers.com/image/77088771], invited the community to an open house for their new building on the corner of Hope and Spadina – its current location.  It boasted new “ultra-modern premises” that ranked with the “best in Canada”.  They cordially invited the community into their new facility for a behind the scenes tour as well as coffee and refreshments.  This sort of courtesy and openness is a product of the culture that was created over decades and through the words, attributes and action of all the contributors, writers and editors of our local paper.

Reading through old editions, I believe the sense of place persisted with the change in location.  But has being further from the downtown core changed the identity or heart?  As technology has shifted to a strong internet presence, the Chilliwack Progress has followed suit.  How has this technological change impacted the effect the Chilliwack Progress has on our community?  How do people today identify in our community?  Is there a disconnect between sense of place and the presence of ‘being’ online?  Interaction has a strong internet base and I struggle to deem this as ‘socializing’ nor does it have the same effect or impact in the community that the Progress had many years ago.

To be in the heart of a community, delivering an assortment of news and being a hub of activity and information is a great challenge and honour.  I am hard pressed to find a current example of such a place that could offer what the Progress did.  A local coffee shop? Local library? Museum, perhaps?  I  hope that the new home of the Chilliwack Progress offers an open door to the community,  ensuring identity and a strong sense of place continues.