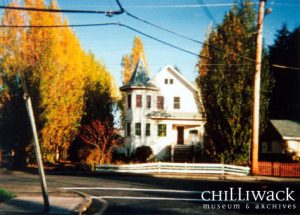 Photograph of the former W.E. Bradwin house near the corner of Williams Street and Portage Avenue in 1974. The subject of much local gossip, the house has since burned down. [Chilliwack Museum and Archives, 1989.042.001]

Near the corner of Portage Avenue and Williams Street once stood a white and green three-story house. Built in 1909 by travelling salesman W. E. Bradwin, the house, built with clapboard siding and equipped with six-bedrooms, became the centre of local legend in the mid to late 1960s.

Things That Go Bump In The Night:

Hetty Fredrickson moved into the house and resided in the house in the 1960s. Known throughout the community for her artistic flair, she taught art to her students from the basement of the house and was the vice-president of the Upper Fraser Valley Brush and Palette Club. Once settled into her new house, she, along with her husband Douglas Fredrickson, began to notice something was amiss.

In the dead of night, footsteps could be heard upstairs. Drawers could be found opened. Furniture, carefully arranged by the homeowners, moved out of place. In one instance, Hetty reported witnessing a light “in the shape of a human being, but with no details, no face.” (The Province, “Portrait of a Ghost” May 30, 1966) . Upon investigation, neither Hetty nor her husband could find the cause of such unusual activity and no logical explanation could be found by any who stopped by the house.

And people did stop by the house.

Using the unexplained occurrences as the basis for some of her art, Hetty painted a picture of the ghost in the hopes that by depicting it, that it would leave. The painting and her subsequent artistic pieces received widespread attention, spurred by stories of the occurrence in the house. Hundreds of people flocked to the downtown Chilliwack house, curious to catch a glimpse of the spirit at work. At one point, in 1966, Hetty Fredrickson submitted an application for a business license to City Council because she had “so many people wanting to see her ‘haunted house’ that she might as well charge admission.” (The Chilliwack Progress, July 20, 1966).  While the application was ultimately rejected, it was reported that 700 people showed up one Sunday for a tour of the premises!

Following the Fredrickson’s move to Vancouver Island, odd occurrences continued to plague residents of the house. Tenants reported seeing shadows moving back and forth, doors banging closed and scaring pets living at the house, unexplained changes to the House’s thermostat… New theories about the ghost began to emerge to explain the wide plethora of baffling activities at the House. Was the house settling a contributing factor? Were residents imagining things? Perhaps it was more than one ghost? An anonymous resident speculated it could be a ghostly trio haunted the turreted house.

In the years after the departure of the Fredrickson’s, the Bradwin house caught fire twice. The first fire in 1972 was attributed to an overheated fireplace. The second fire in 1975 destroyed the House. A new house has been built in its place and, as far as we at the museum are aware, no unexplained incidents have happened since.